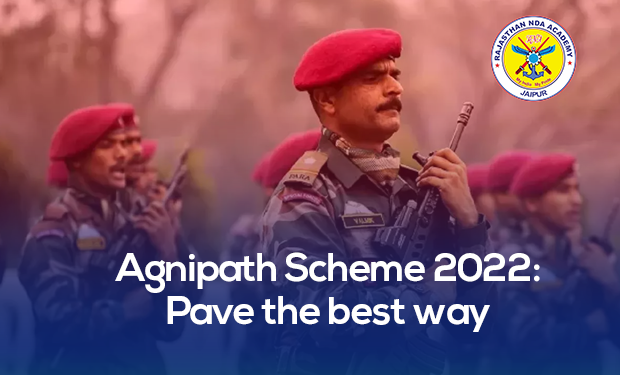 The government of India has announced the Agnipath scheme for the recruitment of the youth of India in the Indian Armed Forces.

What is Agnipath Scheme?

Agnipath Scheme is a consequential decision taken by the Union Cabinet of India on 14th May 2022 wherein the youth of India of the age range of 17.5 to 23 years can apply to the Indian army combat forces for a period of 4 years. Approximately 45,000 to 50,000 soldiers are targeted to be recruited every year. They will be given the title of Agniveers if selected for this recruitment process. After the period of four years, only 25% of the selected members will retain while the rest will get reservations in different jobs under State Government like CAPF, State Police, etc.

Purpose of the Scheme

The primary purpose that stands out and attracts everyone’s attention is that the Government seeks the Agnipath scheme to train the youth of the country in order to strengthen the security forces and make a cut in retirement and pension plans.

For the first year, the yearly package that the Agniveers are set to receive is Rs 4.76 lakhs which will increase up to Rs 6.92 lakhs per annum in the fourth(final) year along with benefits in the form of allowances like risk and hardships, ration, dress, and travel allowances.

One time “Seva Nidhi” package is introduced to be offered to the Agniveers wherein a lump sum amount of Rs 11.71 lakhs will be given tax-free. Along with this benefit, a life insurance cover of Rs 48 lakhs for the four years is added and on the occurrence of death, Rs 1 crore will be provided to the family members including the pay for the unserved tenure. 30% of monthly emoluments will be contributed by the soldiers and an equal amount will be remunerated by the Government.

Teachers at Agnipath Defence Academy are well trained and well versed in their respective subjects. The knowledge they possess helps them to guide the students in the right direction thus improving the quality of education offered.

The infrastructure has been designed in such a manner that it paves the way for a healthy preparation. All the safety measures are taken into strict consideration and ample space is provided not only for the academic contribution but also for the physical exercise notably crucial for the recruitment.

There is no discrimination in imparting the education required on the basis of gender. The institute emphasizes gender equality and thus has opened its door for the women candidates who are willing to serve the nation and are dedicated and ready to work hard.

The institute has one of the highest selection ratios in the region. The overall development - both physical and mental, is taken utmost seriously and thus is primarily focussed on.