Best NDA Foundation Coaching in Jaipur for 10th & 12th Students
NDA is a national level entrance exam conducted every year. Through this entrance examination, qualified candidates are selected for training of Indian Navy, Indian Military and Air Force.The NDA exam is conducted by the UPSC (Union Public Services) every year.
The test has three phases to qualify i.e written exam, SSB interview and Medical Examination. After qualifying this entrance exam, the candidates have to qualify SSB Interview as well.
NDA represents National Defence Academy arranged in Khadakwasla, Pune (Maharashtra) The candidates who qualify NDA exam will go through 4 Year Course and prepare to turn into an Officer in these wings.
Key Features of NDA Foundation Course
When it comes to joining the Indian Armed Forces at a very young age, the ideal option is to join the best NDA Foundation coaching after the 10th class. As we all know, the NDA exam is a major competitive examination that necessitates a great deal of hard work to pass. As a result, students need excellent assistance to prepare for the NDA following the tenth grade. Students who wish to take the NDA written exam after the 10th grade can enroll in Rajasthan Defence Academy to begin preparing under the NDA Foundation Program for the upcoming NDA exam while still finishing their schooling. The academy not only equips students to pass the written exam but also to perform well in the SSB Interview by providing the best guidance. Following are the key features of the NDA Foundation Course offered by Rajasthan Defence Academy.
Rajasthan Defence Academy has launched its Foundation Program, which enables young enthusiasts to achieve their ambitions. We provide academic support to students in this course, as well as nourish the foundations of the student’s cognition so that he/she can prepare for the NDA exam while still going to school.
To assure your success in defence examinations, we have created a coaching curriculum that increases both your knowledge and problem-solving competencies in a technically and practically rigorous and professional way. Rajasthan Defence Academy’s academic setting is indeed very supportive, which will help you succeed in your pursuits.
The NDA Foundation program is well-managed, and it establishes a reasonable balance between the two types of training offered to students. Rajasthan Defence Academy employs a results-oriented training methodology to prepare students to pass the NDA written exam and SSB interview in the first attempt.
The NDA Foundation program is better than conventional education because it allows you to progress toward your objective while maintaining your educational performance. Rajasthan Defence Academy aspires to provide students with a prosperous future by providing outstanding classroom sessions and a foundation course that will teach you how to master the foundations and solve difficulties with effective techniques and strategies.
Eligibility
Science students moving from class 10th to 11th are eligible for this course. The student must have scored at least 60% marks or equivalent grade in 10th and should qualify in our entrance test.
For more information about NDA with Schooling for the students studying in 11th or 12th, please call us at -: +91 -9358833160, Email - rajasthanndaacademy@gmail.com 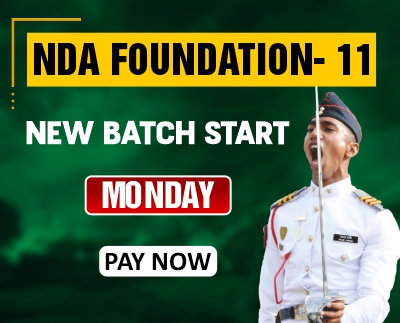