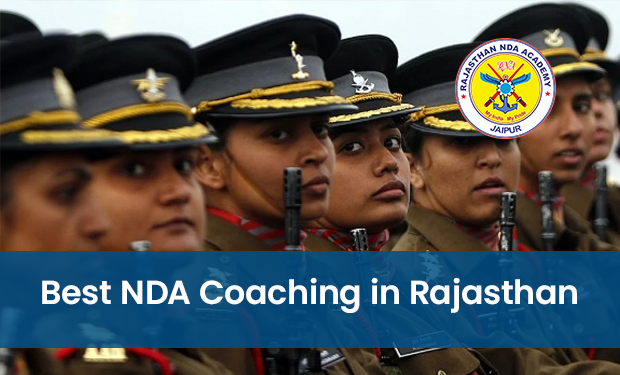 The NDA test is for the Indian armed services. Students who wish to enlist in the Indian Army, Air Force, or Navy must first sit for and pass the test.

The NDA test is for the Indian armed services. Students who wish to enlist in the Indian Army, Air Force, or Navy must first sit for and pass the test. Candidates from all around the nation study for the exam beginning in the 11th grade to prepare for the intense competition. The Union Public Service Commission (UPSC) administers the NDA test, however passing it is difficult. Many students study and take examinations each year, but only a select handful are successful in getting into the NDA. Choosing the appropriate NDA Coaching in Rajasthan is essential if you want to succeed on the test since it will point you in the correct path and aid in your preparation.

Conceptual foundation: By enrolling in the best defense academy in Jaipur, you will have a thorough grasp of the courses included in the NDA curriculum. You would benefit from the tutoring not just for your academic examinations but also for the NDA test. Having a fundamental understanding is essential for learning and doing anything. You'll do better on the test and learn more from it.

Our distinctive programme produces the highest NDA admission scores since we cover the academic curriculum while concurrently guiding our students through the whole NDA syllabus. The adept problem-solving abilities of our professionals also enable them to carry out their goals and pursue a distinguished military career.

Consider doing more than just the syllabus: An NDA applicant must be able to explore beyond the syllabus; it cannot be the sole option. In order to crack NDA, candidates will pay attention and delve beyond the curriculum and foundational courses. The candidate will put his mind and body through disciplined training so they can work together.

We work to create a welcoming environment for the students enrolled in our NDA coaching in Rajasthan in addition to the classroom sessions. Candidates can improve their skills and knowledge and raise their chances of passing the exam on their first attempt by starting their test preparation as soon as feasible.

What Advantages Do We Provide As A NDA Coaching Center In Rajasthan?

We are all aware of how challenging and competitive the NDA exam is, and how much work it takes to pass. Therefore, in order to prepare for the NDA as quickly as possible, students need extraordinary guidance.

We are the best defense academy in Jaipur which enables the young enthusiasts in reaching their objectives. In this class, we support students' academic growth and improve their cognitive foundations so they may prepare for the NDA exam while still in school.

If no one is monitoring or checking your progress, you won't know where you are making mistakes or where you need to improve. Our NDA coaching center in Rajasthan will assist you in understanding your errors, resolving your questions and problems, and improving your errors. You will correct your errors before the exam rather than concentrating on incorrect strategies.

To assure your success in defense examinations, we have created a programme that increases both your knowledge and problem-solving abilities in a technically and practically rigorous and professional manner. Our academic environment is very supportive, which will help you succeed in your pursuits.