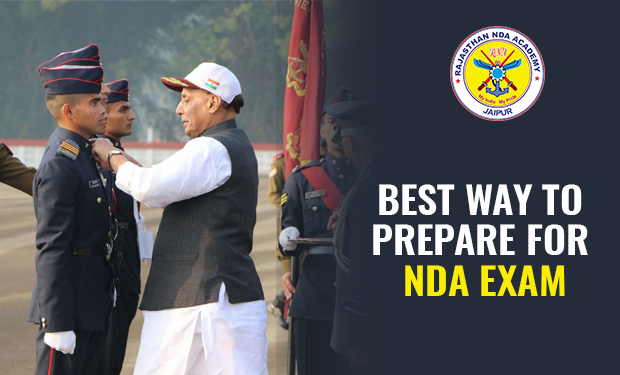 National Defence Academy or NDA, many students think that this is a very tough exam and only very intelligent student can clear it.

National Defence Academy or NDA, many students think that this is a very tough exam and only very intelligent students can clear it. Some students think that only the student with a very high percentage can crack NDA. Which is not at all true. There are a lot of myths regarding NDA, which create confusion in the minds of the candidates. So, before you read this article you must have clarity in mind that only extraordinary students with good percentages do not clear NDA exam but average students with an average percentage can clear the exam.

Not the next step is making the right strategy regarding the preparation. You can choose the below three steps to clear NDA:

2. Join any coaching for NDA or

Let’s compare all the above choices:

1.  Many students think that they will clear NDA with self-study. In the beginning, they set their goals and try of achieving it, but gradually they could not be able to be self-motivated. Also, they lack right strategy and high scoring areas. They struggle alone and many students leave their preparation in between.

2. There are many NDAcoaching in Jaipur, which are advertising about their NDA preparation. But the reality is, that they are not completely dedicated for NDA. They set many targets before the candidates along with NDA. But one should understand that, NDA demands dedicated preparation. Whether it is Mathematics or General Ability Test. The questions of UPSC are never repeated. Also, the Mathematics, Physics and General Knowledge questions are way different from the other defence exams.

3.  The third option is choosing Rajasthan Defence Academy an option for NDA preparation. First of all, Rajasthan Defence Academy is a residential academy. Here, the schedule of a candidate is fixed from waking up in the morning to going to the bed. The candidates live under the observation of retired defence staffs. Here morning starts with Physical Fitness Training, regular classes of all the subjects are conducted following the UPSC pattern. After each chapter previous year paper are solved to give the idea about the changing pattern of the exam. There is provision for evening classes, since the syllabus is lengthy and it is not possible to complete is by only lip service, so according to the requirement evening classes are also conducted. Candidates are given communication and personality Development classes too. Since the ultimate goal is not only clearing the written exam but also the SSB interview. In the evening the candidates are given the sports activities under the supervision of physical staffs. After the dinner the candidates are given time for supervised self-study for three hours.

Rajasthan NDA Academy conducts the regular weekly test, to check the progress of the candidates. Every Saturday morning physical fitness test and in the evening written test is conducted. If you enquire about the tests, then it is promised by many coaching of NDA but they do not fulfil the promise. At Rajasthan Defence Academy we ensure that the papers should be conducted as per the latest pattern of NDA.

NDA exam not only requires knowledge but also stamina. Since the exam is conducted for 5 hours, which is divided into 2.5 hours for each paper of Mathematics and General Ability Test. So, sitting for 5 hours with full efficiency is not easy. Keeping this in mind, just before the exam we conduct regular mock test as per the pattern of NDA so the candidates get the idea regarding the time management.

So, if your choice is defence, the most precious thing for you is time. The age limit for NDA is 16.5 to 19.5. A candidate completes his 10+2 today up to the age of 17 or 17.5. So, he does not have many attempts to waste. So, our suggestion is, take your decision wisely because it is well said that “well begun is half done.”

So, begin well with RDA and fulfil your goal of joining armed forces as an officer.