Difference Between NDA and CDS 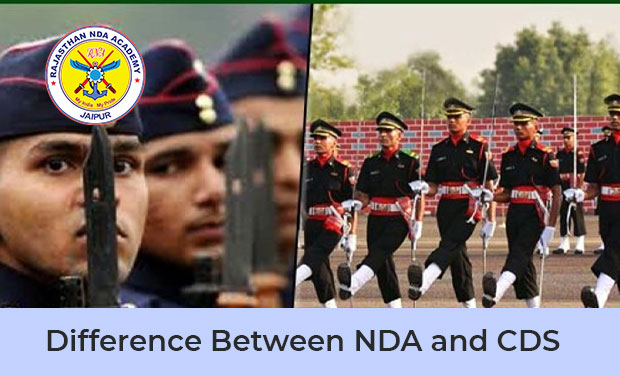 Difference Between NDA and CDS

The NDA exam and the CDS exam are similar in a number of respects. There is overlap between the two tests in several areas.

To determine who will join the Indian Navy, Indian Army, and Indian Air Force, the National Defense Academy (NDA) holds entrance exams twice yearly. Candidates begin their military education at NDA before moving on to pre-commissioning training, as NDA is a joint services academy of the Indian Armed Forces.

In addition, the best CDS coaching in Jaipur provides the best CDS coaching classes for all the students who want to get admission into NDA or any other top government institute. The faculty members provide excellent training to students so that they can face this competitive entrance examination easily without any difficulty or stress on them.

The NDA exam and the CDS exam are similar in a number of respects. There is overlap between the two tests in several areas. So, before we dive into the specifics of how the NDA and CDS tests differ from one another, let's take a look at the areas where they overlap.

Overview of NDA and CDS

The NDA and CDS test are distinct from one another for a number of reasons, including but not limited to the following: minimum requirement, age limit, paper format, stages of exam, degrees conferred, exam training period length, etc.

Candidates must have completed the 12th grade with a focus in the sciences, including Physics, Chemistry, and Math, in order to be eligible for Navy recruitment.

Method of Selection: Two Phases (The first step is a written test, and the second is an interview with the SSB.)

Examination Format: There will be a written test, and it will be worth a total of 900 marks (Divided into the sections of mathematics and General ability Test)

Any applicant to the Indian Naval Academy must hold a Bachelor's or Master's in Engineering from an accredited institution.

Students at the Indian Military Academy (IMA) must be between the ages of 19 and 24. (unmarried)

Admission to the Indian Naval Academy (INA) is restricted to those between the ages of 19 and 22. (unmarried)

Candidates for the Air Force Academy must be between the ages of 19 and 23; those under the age of 25 must be single, and those above the age of 25 who are already married will not be allowed to live with their families on campus or commute home.

Exam: Separated into 2 Phases (Stage one is a written exam, and stage two is the Intelligence test, which includes the SSB interview.)

There are a total of 300 points at stake on the written exam for entrance into any of India's academies.

A total of 200 marks are available for the Officers' Training Program.

NDA coaching in Jaipur aims at providing the best coaching for each student so that he or can achieve his/her goals easily. The institute has qualified teachers who have years of experience in teaching aspirants for various competitive exams like SBI Clerk CPO PO SSC CGL etc.