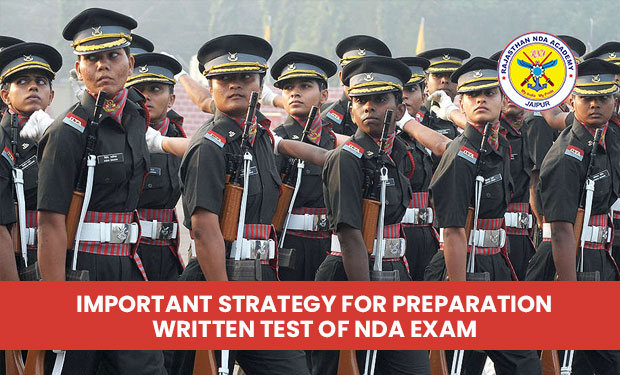 NDA written exam is organised by UPSC twice in a year with the name of NDA-I and NDA-II.

NDA written exam is organised by UPSC twice in a year with the name of NDA-I and NDA-II. The exams are conducted in the month of April and September months. To clear NDA exam you can join the best NDA institute in Jaipur, Rajasthan Defence Academy.

NDA written exam consists of two papers. The marking scheme of the paper is:

The syllabus for the exam is :

Following are the important strategy for the preparation of written test of NDA:

1. Strict to the syllabus: Remember the NDA exam is conducted by the UPSC. UPSC is known to set the paper strictly according to the syllabus. So, don’t go beyond this.

2. Check Previous Year Questions: Before starting the preparing of NDA, first check the level of the question.  The level of NDA questions varies from Air Force and Navy. You can download the previous year papers of NDA from the website of Rajasthan Defence Academy. Coaching of NDA can make your task easy. At RDA, after completion of syllabus, we give clear idea about previous year paper. That’s why we stand out among all the NDA institute in Jaipur.

3. Check the cut offs of previous year exams: The whole NDA written exam is of 900 marks, but the cut off marks for passing starts from 350 onwards. Although to get into merit you will have to score 400+ marks. And out of 900 marks, it is not difficult to get 400. It is even less than 50%. So, keep this in mind while attempting the questions. Many students while appearing in the exam just commit the mistake of wild guess and due to negative marking, they miss their opportunity.

4. First open the door of Mathematics first: Among the two papers Mathematics and GAT, the mathematics is organised first. Those candidates who failed to qualify the Mathematics paper, their GAT papers are not checked. So, to get your GAT paper checked, you will have to clear the qualifying marks of the Mathematics.

Clearing NDA writing exam is not at all difficult. All you need is the important strategy for preparation. In this way Coaching for NDA can definitely help you. Among all the NDA institutes in Jaipur, you can join Rajasthan NDA Academy Jaipur.

We wish you all the best!