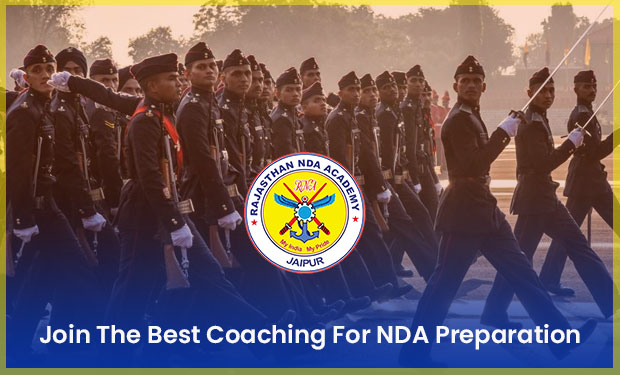 Are you in search of the best NDA coaching for preparation? It is highly mandatory to choose the prominent military institution in the country.

Are you in search of the best NDA coaching for preparation? It is highly mandatory to choose the prominent military institution in the country. The professional trainers and experts can help in preparing cadets for major services like the Army, the Navy, and the Air Force. The training institute in Jaipur can offer reliable assistance in clearing tough NDA exams. However, the efforts are worth the results as you get to become a high-rank officer in the Indian armed forces.

NDA Coaching in Jaipur is the training institute of the Indian Armed forces for efficient cadet training for all three services altogether. The students get to experience the all-around precision training before finding their way into their respective service academies. Preparing for the NDA examination is not an easy task for any aspirant on their own. For healthy and stable preparation, aspirants should look forward to beginning the preparation at the school level.

Why choose the National Defense Academy as a Career?

The National Defense Academy (NDA) is the best tri-service academy on a global scale. It allows the golden opportunity for the cadets to gain round development with a stable career chance. The process to join NDA begins with an India entrance examination followed by a five-day interview process. It is one of the toughest exams in the nation and finding the best NDA coaching for preparation is essential.

Here are some major benefits of NDA as a career option -

●        Additional co-curricular activities like swimming, horse riding, and other sports.

●        Free of cost sports facilities along with free accommodation.

●        Easy access to a renowned institute along with an alumni network.

What can an NDA Coaching Institute offer?

Let’s take a quick look at some of the core perks of joining the best NDA coaching preparation.

As the candidate complies with the knowledge and focus, there will be an urge to work harder. The NDA coaching in Jaipur helps in clarifying the aim among the aspirants. They are likely to bring the best foot forward while preparing for the National Defense Academy.

NDA is one of the most competitive exams in the nation. Opting for the best NDA coaching for preparation puts forward a challenging environment in front of candidates. It will motivate a sense of competition among the students with the same career goals. As students can gain confidence and fighting spirit, they remain more eager to perform better.

The NDA Coaching in Jaipur can prepare the aspirant with academic subjects. They make sure that the student has no doubts or queries while preparing for the NDA exam. The institution can facilitate healthy all-around learning practices.

The teachers of NDA Coaching in Jaipur belong to defense or Armed forces backgrounds. Thus, they are highly suitable to train students with the required personality or mentality development. The right education can impart mental strength and focusing ability on the individual.

The right NDA coaching institute in Jaipur can help the candidate in gaining tremendous development. From physical stability to mental awareness, the defense academy offers the maximum selection chances. Getting training and education under the supervision of teachers' defense backgrounds can be a blessing.

Join the best NDA coaching for preparation and be ready for one of the toughest exams in advance. Experience the best quality NDA coaching with an esteemed institute. Get proficient schooling excellence along with preparation for the NDA examination.