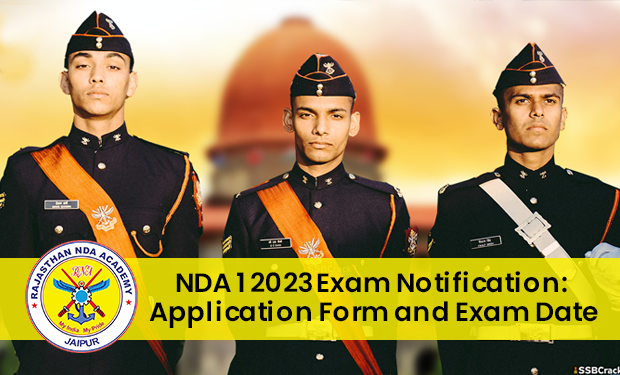 According to the UPSC calendar, the NDA 1 notification 2023 will be released on 21st December 2022. The National Defence Academy Exam is conducted twice a year. It is a national-level examination conducted by the Union Public Service Commission. The NDA Exam can be attempted in Hindi or English and is an offline, written examination.

Applicants will need to understand the NDA 2023 syllabus better and a lot of hard work to pass this exam. On successful passing the entrance exam, clearing the SSB Interview, and the medical exam, candidates who complete their training at the National Defence Academy are recruited into the Army, Navy, and Air Force. The NDA exam date is set as 16th April 2023.

Candidates can check the complete details of the NDA 2023 Application Form in the given steps:

The NDA admit card will be released approximately two weeks prior to the exam on the official website. Candidates are required to download and print the admit card and check their details thoroughly. If there is any mistake, one can inform the authorities via email. Do not forget to carry the NDA admit card on the day of the exam.

The exam is supposed to be held at the following centres:

A candidate must be an unmarried male or female and must be:

Provided that a candidate belonging to categories (1), (3) and (4) above shall be a person in whose favour a certificate of eligibility has been issued by the Government of India.

A certificate of eligibility will not, however, be necessary in the case of candidates who are Gorkha subjects of Nepal.

The candidates should be fit, physically and medically, as per the physical standard set by the National Defence Academy and Naval Academy Examination.

How To Prepare For NDA Entrance Exam

How To Clear NDA Exam In First Attempt?