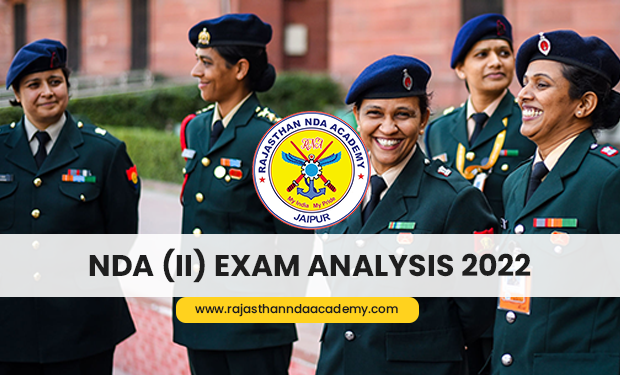 Here in this article, we are going to provide you the complete exam analysis of NDA (II) 2022 Exam.

As you all are aware that UPSC conducted the NDA (II) 2022 Exam on the 4th September 2022. Here in this article, we are going to provide you the complete exam analysis of NDA (II) 2022 Exam. This analysis will provide useful insight to all the candidates appearing and to all the future aspirants.

UPSC Conducted the NDA (II) 2022 Exam on 4th September 2022. UPSC Conducts the NDA Exam for the recruitment of officers in the National Defence Academy and Naval Academy. The NDA Exam consists of two papers. Paper 1 is of Mathematics & Paper-2 is of General Ability Test. Here in this article, we will be discussing the detailed exam analysis, we will also do topic wise discussion and we shall also cover the expected cutoff marks

The Aspirants must be now searching for the NDA Expected cut off marks. The NDA Exam difficulty level has increased from the previous years now as a large number of students appear for the exam. Here we will be discussing the number of good attempts and also the marks that are needed to be scored in the NDA (II) 2022 exam.

Here are some important Highlights:

1. The NDA II 2022 Exam was conducted successfully at all the centers of UPSC for both Maths & GAT papers. The overall difficulty level of the exam was Moderate.

2. NDA II 2022 Maths Paper remains to be Moderate with topics like Trigonometry & Quadratic Equation from which maximum questions were asked. While the NDA GAT Paper was on the easy side where one can easily score good marks.

The candidates must check the number of Good Attempts in order to compare their actual attempts in the NDA II 2022 Exam.

The Aspirants who will be appearing for the examination can check the detailed exam analysis and also can check if they are shortlisted..

Answer key of Mathematics paper is now available on our website

Here below is the detailed paper analysis of NDA II 2022 for the Mathematics section:

Answer key of GAT paper is now available on our website

Below is the division of the GA paper section-wise:

Minimum qualifying standard at the written stage will be least 25% marks in each subject.