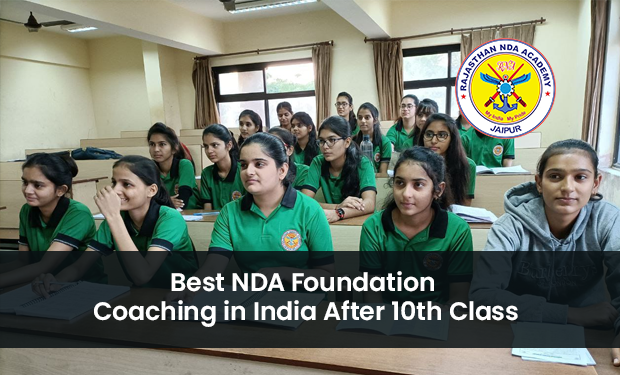 For students who have finished the 10th grade and aspire to join the Indian Armed Forces, we offer a two-year NDA Foundation Course after 10th.

For students who have finished the 10th grade and aspire to join the Indian Armed Forces, we offer a two-year NDA Foundation Course after 10th. The primary target audience for the NDA Foundation Coaching after 10th class curriculum is students in grades 11 and 12. As we cover the academic curriculum while simultaneously coaching our students through the whole NDA coursework, our unique curriculum gives the best NDA entry scores. Our specialists' skilled problem-solving skills also allow them to successfully complete their plans and pursue a prominent military career.

In addition to the classroom sessions, we also endeavor to create a friendly atmosphere for the students enrolled in our NDA Foundation coaching in Jaipur. By beginning their test preparation as soon as possible, candidates may boost their abilities and knowledge and increase their chances of passing the exam on their first try. The purpose of the NDA Foundation programme is to help each and every student pass the NDA written test with flying colors. It covers the whole NDA syllabus.

What Benefits We Offer As A NDA Foundation Coaching Institute In Jaipur?

The best course of action for those looking to enlist in the Indian Armed Forces at an early age is to enroll in the top NDA Foundation coaching in Jaipur after finishing grade 10. We are all aware that the NDA exam is a difficult competitive test that requires a lot of effort to pass. Students therefore require exceptional help to get ready for the NDA after the tenth grade. In order to start studying for the forthcoming NDA test under the NDA Foundation Course after 10th while still finishing their education, students can enroll in our NDA Foundation Coaching in Jaipur.

By offering the finest advice, our institution not only prepares students to pass the written test but also to do well in the SSB Interview. The following are the main characteristics of the NDA Foundation Course after 10th that we provide.

●     Our newly introduced Foundation Program helps young enthusiasts realize their goals. We encourage students' academic progress in this course and strengthen their cognitive underpinnings so they may study for the NDA exam while still in school.

●     We have developed a coaching programme that builds both your knowledge and problem-solving skills in a technically and practically rigorous and professional method to ensure your success in defense tests. Your success in your endeavors will be aided by the fact that our academic environment is quite encouraging.

●     The NDA Foundation course after 10th programme is well run, and it creates a fair balance between the two training options available to students.

●     In order to prepare students to pass the NDA written exam and SSB interview on the first try, our academy uses a results-oriented teaching technique.

●     Our NDA Foundation Coaching in Jaipur is superior to traditional schooling since it enables you to go closer to your goal while keeping up your academic performance.

●     By offering excellent classroom instruction and a foundation course that teaches you how to understand the fundamentals and resolve problems with practical tactics and solutions, we hope to provide students a bright future.