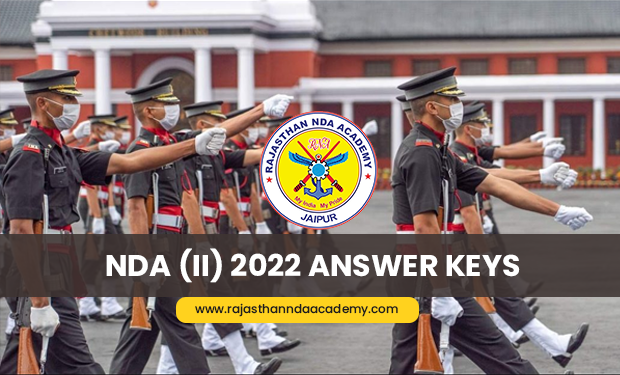 The most accurate NDA (II) Answer keys 2022 is uploaded on website and pdf can be downloaded free of cost.

The most awaited NDA (II) 2022 exam was conducted by UPSC today. Many defence aspirants who are dreaming to join the prestigious National Defence Academy took part in NDA (II) 2022 examination today. As always NDA 2 2022 answer keys for all sets and pdf is available on Rajasthan NDA Academy. The most accurate NDA (II) Answer keys 2022 is uploaded on website and pdf can be downloaded free of cost. The Union Public Service Commission is conducting the National Defence Academy and Naval Academy Examination (II) 2022 at various Centers/Venues all over India on 4th September 2022 (Sunday).  In this article, we will publish the NDA 2 2022 answer keys for all sets based on the original question paper.

WHAT IS NATIONAL DEFENCE ACADEMY?

The National Defence Academy (NDA) admits students to the Army, Navy and Air Force wings through an entrance examination held twice a year, generally in the months of April and November (as per the latest change, earlier it was September). This examination is conducted by the UPSC (Union Public Service Commission).

·  For Army Wing of National Defence Academy: Must have successfully completed Class XII in the 10+2 pattern of school education or equivalent examination conducted by a State education board or a university.

·  Note: Candidates who are appearing in the 12th Class under the 10+2 pattern of School Education or equivalent examination can also apply for this examination.

Plan of the Examination:

The examination is divided into two Phases

(i) Written examination and

After clearing the writing exam, the successful candidates are called for SSB Interview at the Service Selection Board. It is a five days interview procedure.

·      Filling in the personal particulars in forms supplied by SSB

·      Grouping of candidates and allotment of chest numbers

·     Interview of some candidates by President/Deputy President

·     Interview of some candidates by President/Deputy President

·      Interview of the remaining candidates